Peace is difficult, but possible

Before beginning the execution of the pictorial work, the title of which is the head of this writing, the painter considered it necessary to meditate on the many problems related to this subject of peace, so important to the human being, in order to create a painting that has the strength necessary to show the theme expressed by that title and to be able to reach the viewer perfectly. 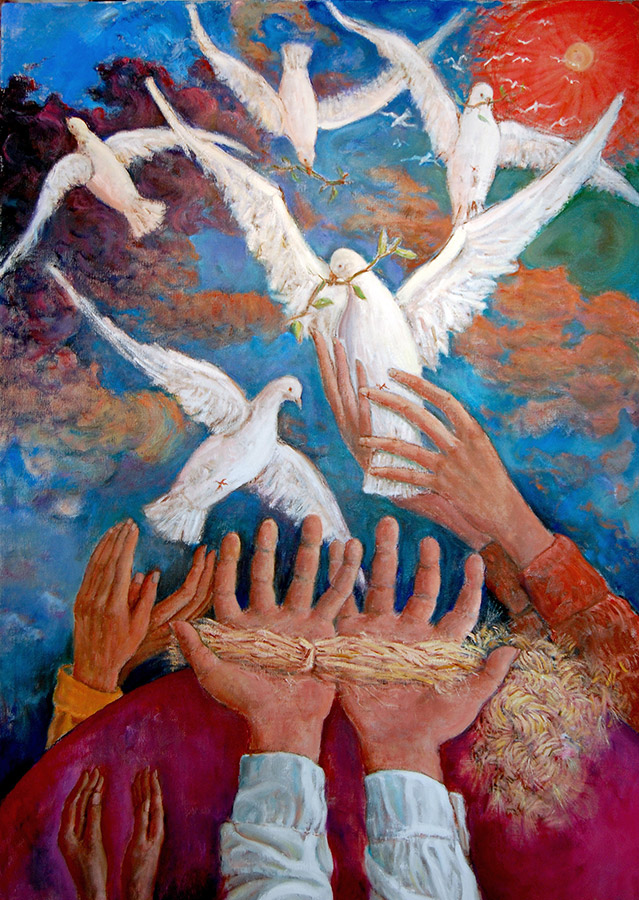 Before beginning the execution of the pictorial work, the title of which is the head of this writing, the painter considered it necessary to meditate on the many problems related to this subject of peace, so important to the human being, in order to create a painting that has the strength necessary to show the theme expressed by that title and to be able to reach the viewer perfectly.

Peace is a virtue that gives people peace of mind and calm and implicitly brings love and respect to others, helps others, either spiritually, either materially, reconciles and gives good relationships between people, especially in families, in the treaties or covenants between nations, in order to avoid or end wars, yet peace is one of the most sensitive and fragile values of humanity, for today, in general, the world is more selfish to the detriment of love in human relations.

On the other hand, life is difficult and full of problems that take away our peace frequently and make us live day to day with worry and nervousness, although problems are inherent in life and disappear when it ends.

That said, that is, the reasons that motivated the painter to make the work before us, giving it exceptional importance for its subject matter, and in order for the viewer to identify with the work and understand the painter’s concern regarding its execution and figurative surrealism. Referring to the picture in question, we will say that the desires for peace prevail throughout the world and come from God, which are represented by white pigeons by the purity of the divine message,  carrying on its beaks a few twigs of olive, emblems of peace, whose pigeons  come in big flocks everywhere on our planet

to leave that peace, in turn, by the four cardinal points of the earth, north, south, east and west, appear pairs of human hands trying to catch one of those pigeons, which proves, that the world needs such peace, but the many clouds we see in the sky , which represent the varied and important problems that arise at the time of the peace discussions, hinder success. The clouds corresponding to the right, reddish side, show a hope in catching one of those peace pigeons, but the other clouds on the left side, whose colors range from reddish to dark violets, manifest a loss progressive hope, for pigeons preferably come from the right and go left. Therefore, in view of the circumstances indicated, it is generally difficult, that the aforementioned pigeons can be caught by humans, and therefore, failed the attempt, they fly back, without the olive twigs, to make future trips, for this reason, we see in the aforementioned picture some pigeons that come and others that leave, but none has been grabbed by the aforementioned hands.

To better understand the pictorial work at hand, we consider two kinds of peace, domestic and international. the first,less complicated, is for the people in general, the families and peoples of a nation, where there is some cognitive correlation and whose efforts to achieve that peace are relatively easy, although this peace may be less lasting. As we can see, the simile that has been used, is that of the white pigeons mentioned above. The Second, international peace, has different characteristics to be more complicated and complex, particularly when it comes to the great migration movements fleeing wars to find a place of peace and coexistence, leading to great difficulties the selfishness, interests and characteristics of different nations. Los símiles usados en esta paz internacional son, además de las susodichas palomas blancas, dos manos unidas mostrando un manojo de espigas.

Having said this and returning to the pictorial work, we see in the foreground an open and joint hands, as waiting to catch or receive something, representing all the nations seeking peace, and therefore, being united, those hands forewarn a principle of agreement. Between the thumbs and on the palms of the hands, there is a bunch of cereals with their corresponding spikes, favorite food of the pigeons, which serves as bait to stimulate their coming and facilitate their capture and achievement of peace. By this we mean, the easier we make things the better result we will have. The simile of the spikes has been chosen, because the grains corresponding to each spike are joined or crowded giving idea of union, and in turn, if we sow them in good awedland, they give life to other grains, in the same way, when nations come together as grains of a spike and sow good ideas on a particular issue, in our case, peace, will get a good harvest of well-being for Humanity. Therefore, given the simile used and bearing in mind that we are speaking in a metaphorical and surreal sense, the aforementioned good ideas carry with them, that the nations participating in the peace agreement, must show willingness, meet in an appropriate place, approaching his various proposals, within a friendly environment, avoiding offensive language, not looking at himself as enemies, taking the time necessary to reach an agreement, with an open and responsive mind, leaving aside nationalist interests.

Of course, this does not mean that it will always be the same, life is very changing and the circumstances are not always the same. Finally, we finish this writing with the title of it,“Peace is difficult but possible”,because it is a matter of patience and insistence, this is the recipe of life, with which everything is impossible.