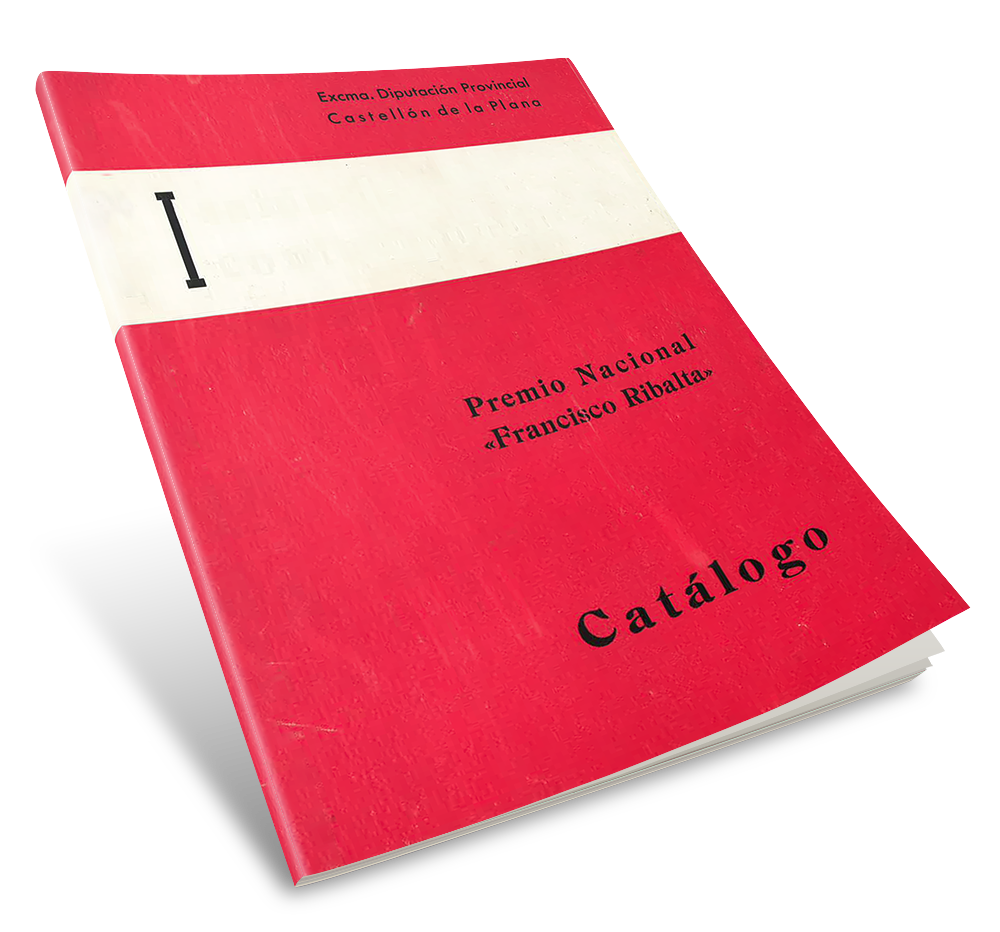 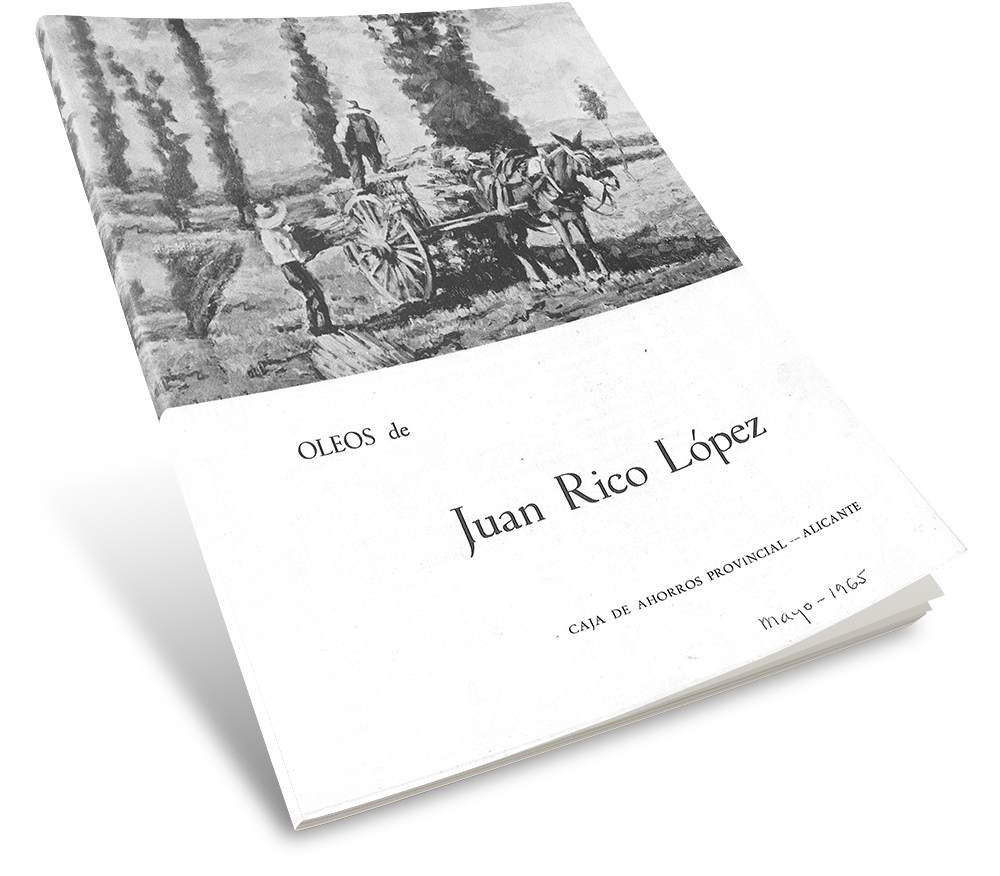 Individual expositions: – Valencia: Estíl Gallery 1966 and 1967. Sala San Vicente, 1969. – Madrid: Club Pueblo Exhibition Hall , from the newspaper of the same name. Total success, more than 200 people at the opening, very good reviews and sales. Juan de Ávalos, a sculptor from the Valley of the Fallen, said ” When you were born, Ricolópez, God touched you on the shoulder and said- you painter- “. 1966. – Madrid: Galería Eureka 1967, and Galería grifé y Escoda 1970. – Bilbao: Sala de Arte Miqueldi 1968 and Galería Arte Arthogar 1970. – Barcelona: Galería Augusta 1967 and 1969. – Valladolid, Salamanca Savings Bank 1968. – Palma de Mallorca , Círculo de Bellas Artes . 1970. – In 1967, the Painter Picasso held a large retrospective exhibition of painting and sculpture of some 400 works at the Petit Palais and Grand Palais in Paris, whose exhibition was attended by the Spanish Painters belonging to the Association of Spanish Painters of Ansiba. – In number 231 of the prestigious TELVA Magazine of May 1, 1973, our countrywoman and journalist Concha Albert dedicates an article entitled ” Los Limlados de Ricolópez “, which occupies a whole page and deals with reason and my message. painting.

Collective exhibitions: – Invited to the “International Salon of Paris-Sud” . – “XX Autumn Exhibition of the ROYAL Academy of Fine Arts of Saint Elizabeth of Hungary” – Gallerie Chistiane Colin in Paris. – “National Exhibition of Contemporary Art1972, of the Ministry of Education and Science” in Madrid. – “XXVII Salon de Realites Nouvelles”in Paris. 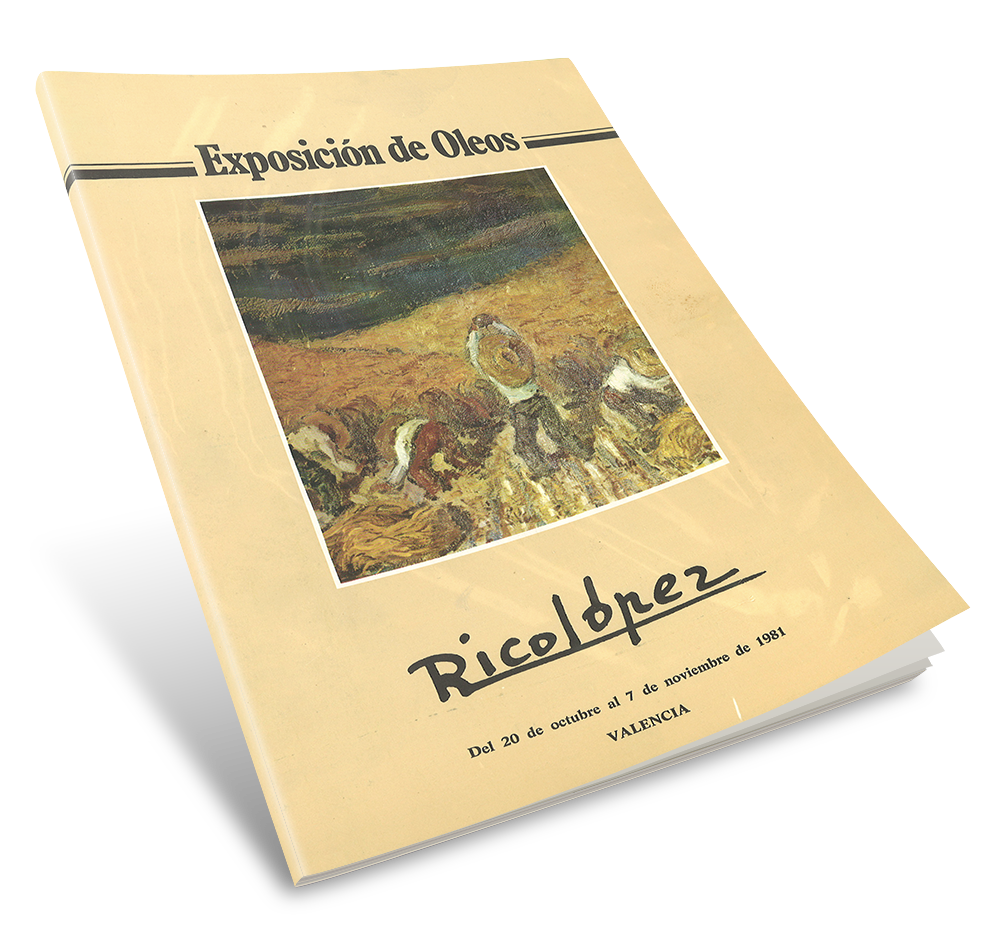 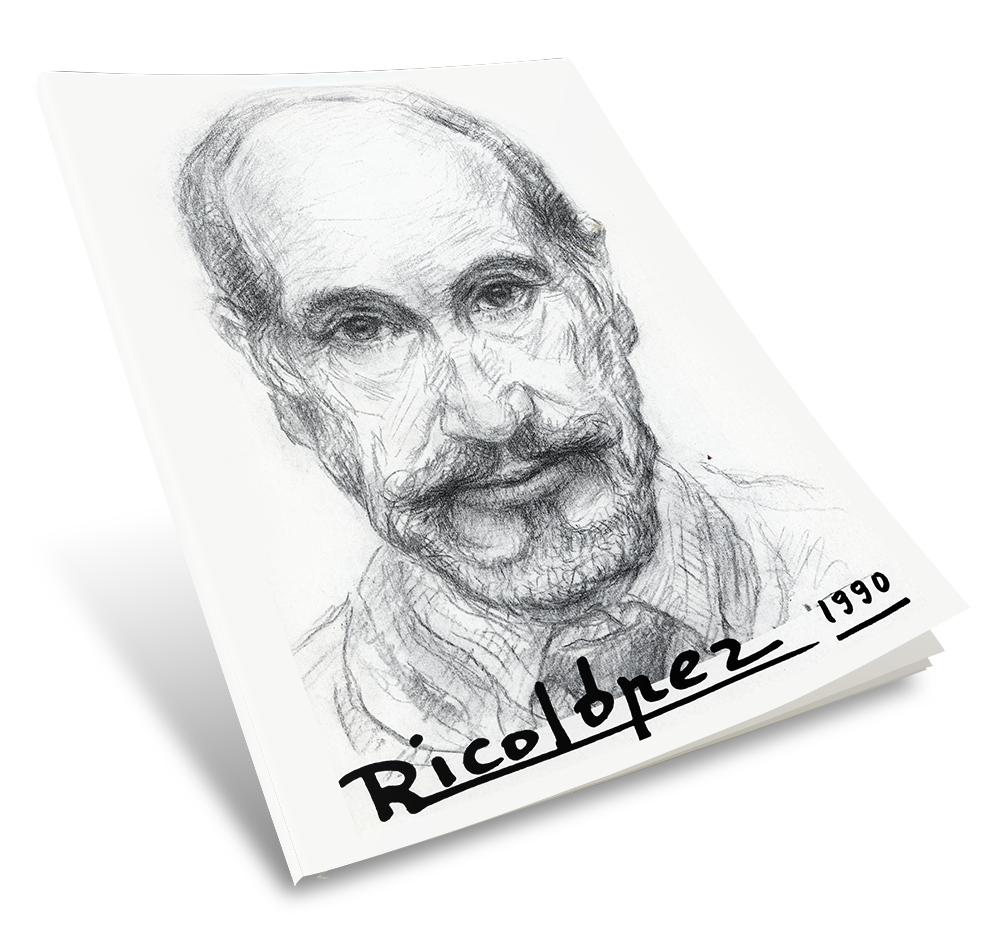 Individual expositions: – Valencia: San Vicente Gallery 1986. Sala de Arte Gabernia 1989 and 1990. – Madrid ” Toisón Gallery 1986 and 1987. – Yecla (Murcia): Municipal House of Culture , Miami Collection, Exhibition – Tribute sponsored by the Hon. City Hall on the occasion of the delivery of the “Keys to the City” of Miami, for my contribution to Spanish culture in the United States of America. The Mayor of Yecla, Mr. Vicente Maeso, gave me a plaque as a tribute to my hometown. 1986. – Yecla : Exhibition at the Recreative Society of Hunters. 1987. – Miami: María Calas Art Galleryand at the Hotel Columbus-Vizcaya Room 1985. The American Cancer Society selects two oil paintings by Ricolópez for the covers of its 1986 and 1989 Almanacs, respectively. Exhibitions were held at the Big Five Club. Bibliography: 1990 edition of the book “Les Edition Arts et Images du Monde. Prestige de la Peinture et de la Sculture d’hui Dans le Monde” in Paris. 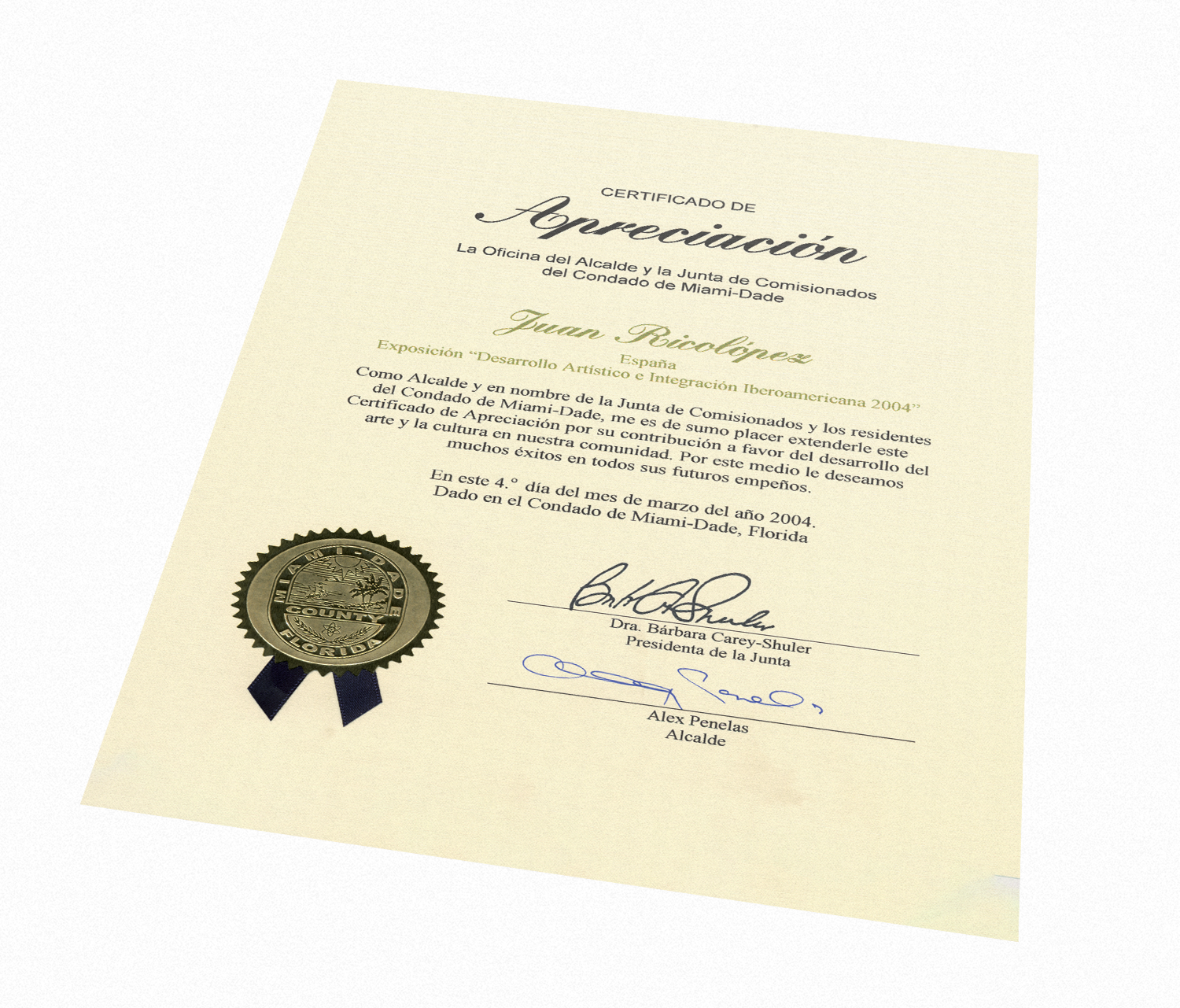 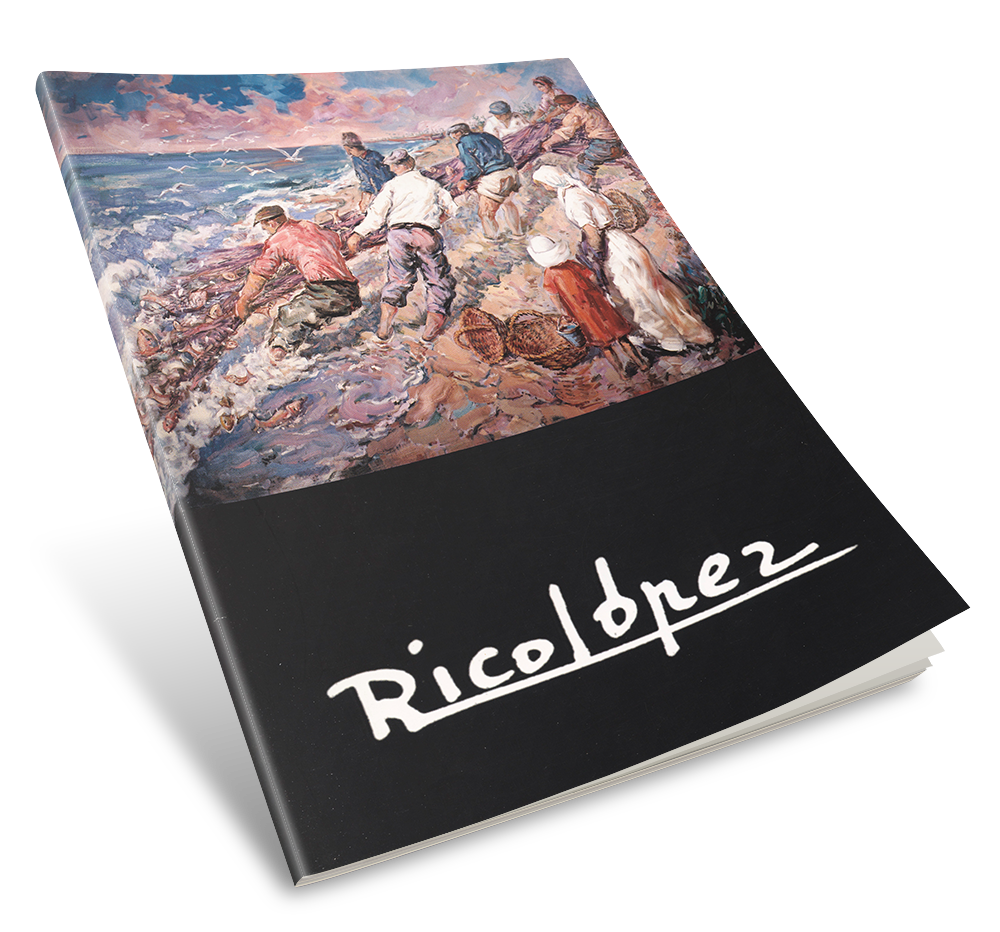 Individual expositions: – Valencia: Sala Gabernia 1996 – Hoboken (New Jersey- USA): Exhibition at Saint Mary Hospital. 1996. – Madrid: Tribute retrospective exhibition at the Egyptian Embassy sponsored by the Concha Marquez Foundation. 1999. – Chicago (USA): Exhibition at Nicole Gallery and at the Cervantes Institute, on the occasion of “La Noche de España” at the XVI Latin-Film Festival. 2000 – Miami: Exhibition at the American Cancer Society with auction of a painting by Ricolópez. 2000. Awarded with the “Featured Artist” Award“ in “Finest in the Midwest Show 99”, in Chicago (Illinois), Madison and Milwaukee (Wisconsin). Bibliography: Art Books ” Contemporary Valencian Artists ” and ” Dictionary of Contemporary Valencian Artists and Sculptors of the 20th Century ” published in Valencia. ” Dictionary of Contemporary Spanish Painters and Sculptors of the 20th Century ” published in Madrid.

Collective exhibitions: – Miami: Represents Spain in the “International Exhibition of Painting and Sculpture” at the “Museo Del Barrio” in Little Havana. 2001, – Miami: Exhibition “Euro American Art” sponsored by the prestigious International Ibero-American Magazine and the Wallflower Gallery. The Consul General of Spain congratulated this Socio-Cultural magazine, for being our country masterfully represented by the unique art of Maestro Ricolópez that so worthily represents the great tradition of Spanish pictorial art. In turn, I received a Diploma of ” Master in Art “. 2001. – Guest of honor to represent Spain in the exhibition “Expresiones del Arte Iberoamericano 2001” in Miami, sponsored by the Wirtz Gallery of the Firs National Bank of South, being awarded a Diploma of Honor by the City of Miami, Miami-Dade County and the City of South Miami, as the highest representative of Ibero-American Art 2001. – Exhibition “ Formas y Color del Arte Hispano Americano ” at the International Finance Bank of Miami. 2002. – Peru: Exhibition “Peruvian and Ibero-American Artists in the United States of America” in the Hall of Lost Steps of the Congress of the Republic of Peru. The Ricolópez art book became part of the Library of the aforementioned Congress. The cover of the catalog reproduces a work by Ricolópez. 2002. – Miami: Exhibition of Painting and Sculpture “Harmony, Peace and Love 2003” by Artists from America and Europe at One Brickell Square Gallery, being awarded a Diploma of Honor by the Mayor of Miami-Dade County. 2003. – Miami: International Art Exhibition “Artistic Development And Iberoamerican Integration 2004” at One Brickell Square Gallery. I received a “ Certificate of Appreciation ” for my contribution in favor of art and culture in our community. Miami-Dade County. – Miami: Participates in the “XXV Hemispheric Congress of Chambers of Commerce and Latino Industries” at the Radisson Convention Center, in a stand with an exhibition of his works together with the sculptures of the Artist Dulce María Rico, daughter of the Painter. 2004. 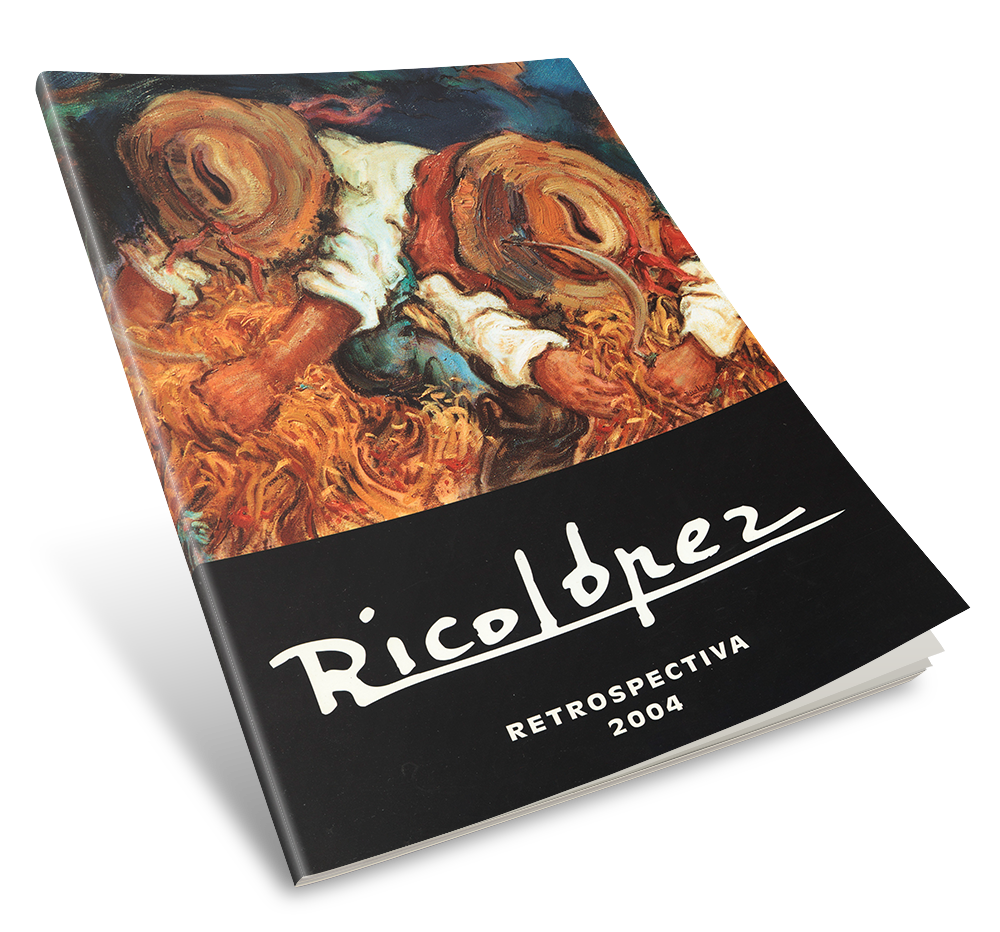 Individual expositions: – Valencia: Gabernia Art Gallery 2001. – Yecla (Murcia): Exhibition hall of the ”House of the Mayordomos de la Virgen” . I designed the Poster for the Patron Saint Festivities of the Immaculate Conception, whose festivities have been declared of National Tourist Interest. 2002. – Phoenix (Arizona, USA): David Lee Gallery 2003. – Santo Domingo (Dominican Republic): Museum of the Royal Houses . Exhibition sponsored by the Secretary of State for Dominican Culture. 2003. – Valencia: Gallery Segrelles del Pilar 2004. – Miami: Exhibition “Unfolding the Mind” at Azucart Gallery, sharing the room with his daughter, sculptor, Dulce María Rico. 2005. Awarded with the “El Faro Award for the Best Yecla Ambassador in the World” awarded by Grupo Editorial el Faro, at the request of the weekly EL FARO DE YECLA.

Collective exhibitions: – New York: Exhibition “Color and Tranquility” at Agora Gallery, in Chelsea, NY. 2006. – Miami: Exhibition of educational Art at “Coral Gables Education Center” . 2006. – Valencia: Segrelles del Pilar Gallery. 2006 and 2008. Art Gallery Altea Art 2010. – Madrid: Altea Art Gallery. 2007. – Sunshine (Florida-USA): Exhibition at the Mansion of Dr. Vogel, international specialist in Cancer. At the opening of this exhibition, Dr. Vogel announced that the painter was going to portray his wife Emi, which happened days later. I participated in the Tribute to the excellent writer José Luis Castillo-Puche sponsored by the University of Murcia, whose events took place at the Municipal House of Culture of Yecla (Murcia), 2007. – “IX Edition of the Fast Painting Contest” in Honor of the great professional career of the artist Ricolópez, who was part of the Jury of the awards and presented the awards to the win 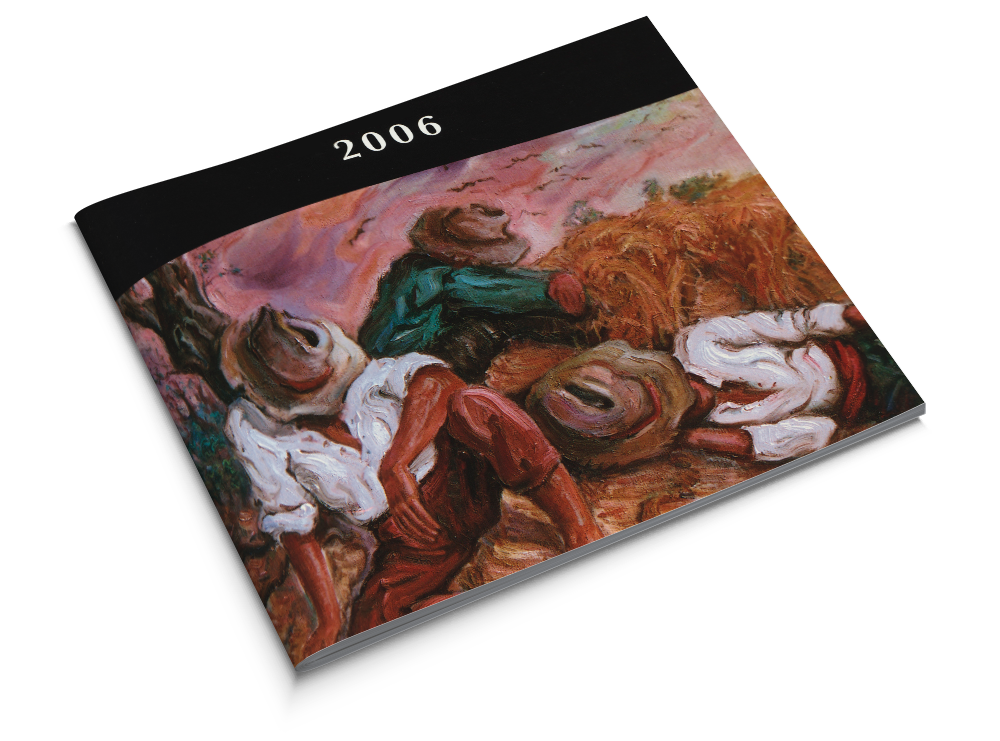 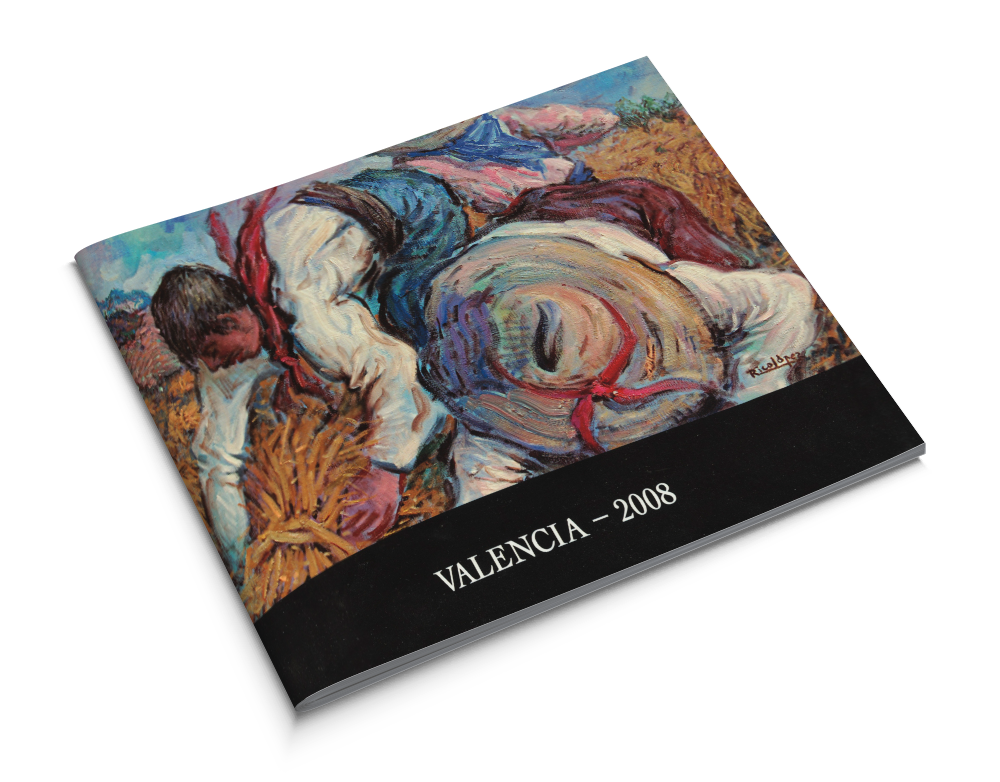 Bibliography: Book “Art 2001” edited by the Miami International House and Style Magazine, which was presented to the public through an exhibition of works by the artists listed in said book, in the prestigious Puerta del Sol, Douglas Entrace building in Miami. Art Book “Painters who leave Traces” published in Valencia. The prestigious Miami magazine “Vanidades” on January 7, 2003, publishes a study of Ricolópez’s work with the reproduction of five of his paintings.

– Murcia: Exhibition “Retrospective. 60 Years of Painting ” , at the Museum of Fine Arts , with the corresponding Press Conference at its opening. Of the 50 paintings that comprise this exhibition, I donated two of them, ” Storm on the beach of Mazarrón “ and ” Segador “, to the Autonomous Community of the Region of Murcia, becoming part of the museum collections of the Museum mentioned above, according to a letter of December 14, 2012, from the General Director of Cultural Assets of said Autonomy. 2012.

– Yecla (Murcia): Free donation of the 48 remaining paintings from the previous exhibition plus two new ones, a total of 50 paintings, to the town of Yecla, our hometown, represented by His Excellency. City Council, made this Donation by my wife, Josefina, and by me, to create the Ricolópez art museum . Said donation was accepted by the Local Government Board, in a session held on December 4, 2012 and notarized on January 3, 2013.